The history of the Kelpie begins in Scotland. In 1870, a sheep rancher named William Allen of Geralda Station, near Forbes, in New South Wales, imported a pair of black and tan smooth-coated dogs with prick ears. They were purchased from Mr. Rutherford of Scotland and were known as fox collies.

Legend has it that these dogs had a bit of fox running through their blood. This belief came from the fact that there was always a red pup in each litter. In actuality, these fox collies were probably very closely related to the ancestors of the modern border collie. The border collie comes in various colours and both smooth and long coat, with both upright and semi-prick ears.

The two dogs, ”Brutus” and ”Jenny,” were mated on the ship en route to Australia. The pups, born in Australia, were all black and tan, except for one red pup. The dogs were silent workers, with a wide cast and strong eye. They were ideal for working the flighty Merino-type sheep that the ranchers raised on the sheep stations.

About this time, another sheep rancher, Mr. Gleeson, obtained a black and tan bitch from Victoria. Although her pedigree was unknown, she looked and worked like Brutus and Jenny. Robert Kaleski’s accounts say that she may have had a trace of Dingo blood in her, but this was never proven.

This bitch, whose name was ”Kelpie,” was bred to one of the offspring of Brutus and Jenny, a black and tan male named ”Caesar.” Meanwhile, the red male from Brutus and Jenny’s litter, after proving himself to be an able-bodied worker, was stolen from the sheep station at Goolagong. Although his exact whereabouts could never be traced, he was undoubtedly the forefather of all the red Kelpies in Australia.

Mr. C. B. W. King, who was the manager of Wollongough Station, Humbug Creek, near Condobolin, New South Wales, was given one of the pups from Kelpie’s litter. She was a black and tan pup and resembled her mother so much that Mr. King named her ”Kelpie II".

”Kelpie II" made her mark when she competed in and won the very first sheepdog trial in Australia at Forbes, New South Wales, around the year 1872 or 1873. Her puppies, which of course became very much in demand, became known as ”Kelpie’s Pups.

Soon ”Kelpie” was established as the breed name. The word ”kelpie” is Gaelic for water sprite, which fits this agile, quick breed very well. Anyone who has known the Kelpie will admit this dog is a serious worker with a touch of mischief to its personality.

Another line of Kelpies was developed from one of Kelpie II’s offspring. Her name was Sally, and she was bred to a solid black male descended from Brutus and Jenny whose name was Moss.

A black male pup from this litter was acquired by a stockman named Davis. Because of his forceful personality and his great speed, the pup was named ”Barb,” after a great racehorse of that era. Later he was sold to Mr. Edols, of Burrawong, who used him as a stud dog.

The ”Barb” was prepotent for his black colour and power on sheep. Known as ”Barb’s pups,” black Kelpies soon became known simply as Barbs.

The Kelpie played a vital role in the working ability of today’s Cattle Dog. In some lines of Cattle Dogs, one can still see the low crouching style and intense ”eye” of the Kelpie coming through. This is especially apparent in the ”play” mode of many young puppies, where they will stalk each other. 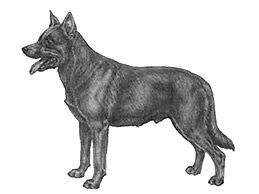 A breed standard is the guideline which describes the ideal characteristics, temperament, and appearance of a breed and ensures that the breed is fit for function with soundness essential.

Breeder of Australian kelpie since 2005.