My name is Brigitta Golde the owner of Kennel Skovfarmen's. I used to breed horses and horses used to be my greatest passion but in 2002 I met a dog who stole my heart! It was not a purebred kelpie but a kelpie x GSD. I was hooked – I have had other dogs in my life but I had to find out more about this amazing breed!

In 2003 I got my first Australian kelpie from Kennel Whyalla's in Sweden. I chose Cita because her mother was an Australian import and I was looking for a dog with bloodlines not so well represented in Denmark. I chose the Australian kelpie and not the working kelpie because I wanted to be able to do a lot more with my dogs than herding. I use my dogs as herding dogs as well – living on a small farm with a herd of Limousine cattle.

Half a year later another kelpie girl entered my life. St. Toröjes Kia – a Danish bred bitch who was 4 years old when I got her. Cita and Kia are the foundation bitches of my breeding.

I got my first litter in 2005! In 2006 I got my Kennel prefix recognized by FCI and DKK. Kennel Skovfarmen´s was born. Since then I have learned a lot. My heart is burning for this amazing, very versatile dog that the Australian kelpie is. Several litters later I am still learning – being a pedigree nerd and a Kelpie nerd.

This amazing breed who stole my heart has given me many adventures and wonderful experiences with lots of new friends around the world and with more to come in the future. It has gotten me involved in the dog world – not only as a breeder but now also as the Breed representative of Australian Kelpie in Denmark under the Club KHKG – The Club for Herding and Cattle- and Guarding Farm dogs.

I train my dogs in DcH – The Danish Civilian Dogtraining Club and I am Chairmand of the board in our local DcH Club Langaa. 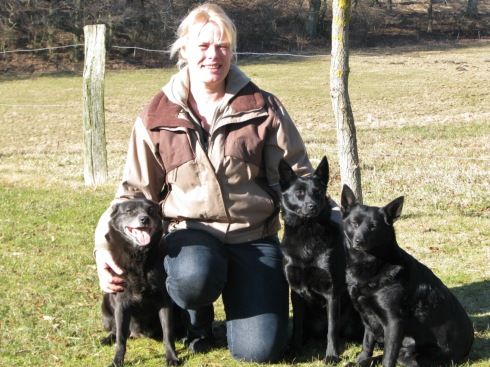 Breeder of Australian kelpie since 2005.